UFC 221 is an upcoming mixed martial arts event presented by the Ultimate Fighting Championship (UFC) that will be held on February 11, 2018 at Perth Arena in Perth, Western Australia.

So far the fights officially announced are: 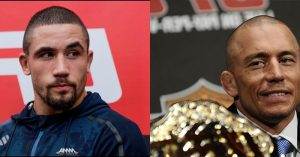 St-Pierre captured his second divisional title when he defeated Michael Bisping at UFC 217 in Madison Square Garden. However, GSP announced that he would be relinquishing the title since he needed to address some health concerns.

Robert Whittaker defeated Yoel Romero last July at UFC 213 in an interim middleweight title bout, and has been rehabbing a knee injury since then. With St-Pierre no longer champion, the UFC announced that the champion Robert Whittaker would now fight Luke Rockhold in the main event.

However, Whittaker was then removed from the card due to an injury/ As a result. the UFC announced Yoel Romero and Luke Rockhold will now fight for the interim middleweight title.

A recent rumor stated the UFC is also currently targeting a strawweight title fight between champion “Thug” Rose Namajunas and Tecia Torres. However, it was later revealed that Torres will fight Jessica Andrade at UFC On Fox 28.

The Ultimate Fighting Championship (UFC) was in Perth, Western Australia

Former UFC middleweight champion Luke Rockhold has received a rather

Longtime voice of the Octagon, Bruce Buffer is a fight

Yoel Romero’s moment of affection directly after knocking out Luke

UFC 221 took place inside the Perth Arena in Perth,

The Ultimate Fighting Championship (UFC) was in Perth, Western Australia

Perth, Western Australia hosted an exciting night of fights over

The Ultimate Fighting Championship (UFC) hosted an intense night of