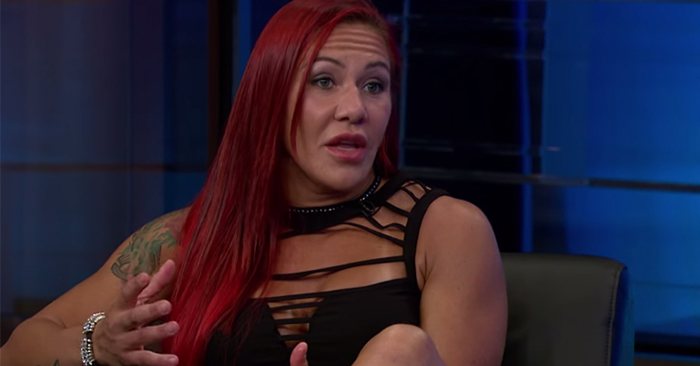 The biggest feud in UFC female fighting history has up until this point always been Ronda Rousey vs. Miesha Tate. The two fought twice, and it was never sportsmanlike in the lead up or the aftermath. The two fighters, even to this day, still hold a grudge. However, there’s a new rivalry brewing though, and quickly coming in to take over the Rousey-Tate slot is a female spat between Cris Cyborg and Angela Magana.

And sure, they may be separated by 30 pounds of weight-class, but that hasn’t stopped Angela Magana from calling Cris Cyborg a man with a penis every chance she gets. And it surely didn’t stop Cyborg from punching her in the face when the two crossed paths in Las Vegas.

Never before had a UFC female champion struck another female outside of the cage, and if you ask Cris Cyborg, she’s still got harsh feelings towards Magana.

In a new twitter post, Cris Cyborg once again discusses the cruel words of Magana, and reiterates that she is not transgendered.

When I complain @ufc about things Angela Magana say they tell me she 10-99 and have freedom speech they can not censor! I'm not trans!

It’s unfortunate that Cris Cyborg is forced to continue to address her sexuality with fight fans. Given her appearance she’s an easy target for any on-line bully looking for a quick laugh.

The female champion though, should be respected as an athlete.