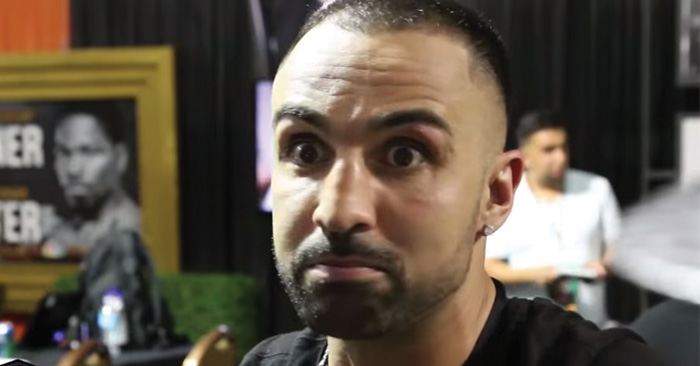 Following a very public falling out prior to the MayMac event, Paulie and Conor were sparring partners. The team brought Malignaggi in to help Conor prepare for Floyd.

Conor was not without his own reasons, but he did a good job ridiculing the boxer after he decided to pack his things and leave camp.

In an unheard of move, Conor and team released sparring footage and photos online, showing Paulie getting handily worked over by the UFC champion.

Paulie hasn’t been able to get over it ever since.

The latest is that Conor has invited Paulie to the UFC for a “real fight”. Paulie though, is uninterested in accepting the challenge at this time.

He still is very vocal on his social media whenever Conor’s name is brought up, and he continues to call the UFC champion names and disrespect him on twitter whenever he has the chance.

Now Paulie is getting into it with a new UFC fighter on the rise, Chase Sherman.

Love how u keep it politically correct when ur shit talkin gets to the point where u gotta back it up. Stay in ur lane, AJ puts u in a coma https://t.co/onSFWKIg23

Stay in my lane? Aren't you the one who is retired and tweeting about an MMA fighter? Ironic.

Yes Chase, talking boxing to settle a beef (not started by me) in boxing. That would be my lane and my sport. Be well. https://t.co/cjxIRWybeu

I think you're the only one beefing though Pauline. Haven't seen one Conor tweet about you. You have 4 tweets since July w/o Conor's name. https://t.co/JuF7rJCCDV