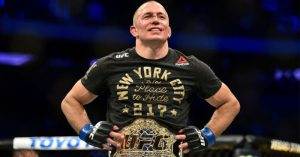 Ever since former UFC welterweight champion Georges St-Pierre graced the

With the recent return of Georges St-Pierre, it would appear

Georges St-Pierre made his big return to the octagon at

Georges St-Pierre first vacated his welterweight title after deciding to

In an odd and cryptic post to his social media,