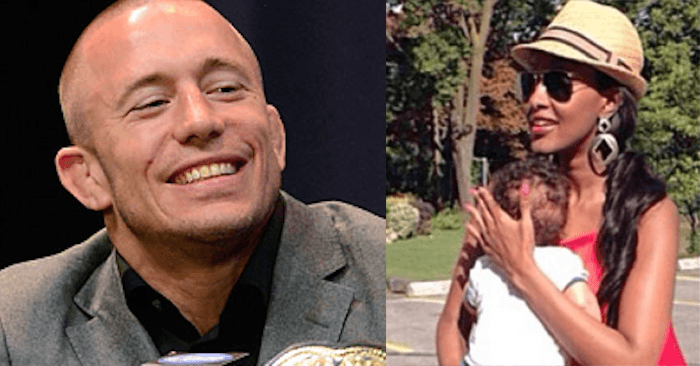 Former UFC Welterweight Champion Georges St-Pierre revealed in the summer of 2016 that he was, in fact, a free agent in the world of mixed martial arts. While the Ultimate Fighting Championship tries to sort out the issues holding him up for his return, St-Pierre has been keeping sharp in the gym while training practicing his gymnastics skills.

Quebec news source Dans Les Coulisses first reported over two years ago that St-Pierre was actually the father of a newborn baby named Liam. If this rumor holds any truth, Liam would be just over two years old. This is an excerpt from the site, translated from French:

“According to numerous sources, a woman … gave birth to a little boy named Liam, in recent weeks. The boy mulatto/ mestizo is in good health, according to these sources . It would have also been dubbed the weekend last.”

“Last spring, I was told that Georges was hesitant to get involved personally in the life of his future little boy. His plan was to support the lady (who is not her spouse) and her child financially, but he hesitated to do more.”

“I do not know if things have changed since the birth of Liam.”

“You already know (if you read the site regularly) that Georges St. Pierre is the father of a beautiful little 2 year old boy named Liam. Know that Georges is in excellent condition with the mother, without however forming a couple with her. If you want to find out who is this happy and pretty mother (named Divine Kirezy), you can click on the following links [redacted].”