Derrick Lewis (born February 7, 1985) is an American professional mixed martial arts (MMA) fighter, currently competing in the heavyweight division of the Ultimate Fighting Championship (UFC). Lewis has been a professional competitor since 2010, and has also competed for Bellator MMA and Legacy, where he was the heavyweight champion. As of October, 2017, he is currently #6 in official UFC heavyweight rankings. 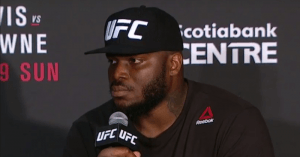 “If it wasn’t for MMA, I’d be doing a lot worse stuff than what I’ve been doing. I really, really try to kill my opponents, even though I know I can’t do it because the ref is there,” he said. “But that’s my intention every time.” Lewis said to MMAjunkie when asked about his start in the sport.

UFC heavyweight Derrick Lewis was placed on probation for aggravated

The Ultimate Fighting Championship (UFC) will be hosting an incredible

UFC heavyweight Derrick Lewis is set to challenge for the

UFC heavyweight Derrick Lewis didn’t work out at the recent

Two-division UFC champion Derrick Lewis only has a single loss

UFC heavyweight contender Derrick Lewis earned a come from behind