Frankie Edgar (born October 16, 1981) is an American mixed martial arts (MMA) fighter who competes in the featherweight division in the Ultimate Fighting Championship (UFC) and is a former UFC lightweight champion. He holds notable victories over former world champions Sean Sherk, Hermes França, and smashed B.J. Penn to pieces three different times. As of October, 2017, Edgar is currently ranked as the #2 featherweight fighter. 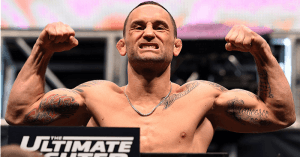 “After I graduated from college in May of 2005. I always liked the sport. I have seen other people with a wrestling background do well, and I felt that I could succeed.” Frankie Edgar said about his start in MMA.

Edgar continued, “If everything goes as planned, I’ll be fighting for a long time. That’s what I want to do. I don’t know how long the business will even be around for me to take over, but I enjoy this sport. I enjoy working out, I enjoy helping people. I’m coaching now at Rutgers. I’ll always be involved in wrestling, and I’ll always be involved in mixed martial arts. That’s my future.”

The Boardwalk Hall in Atlantic City, New Jersey hosted an

The Ultimate Fighting Championship (UFC) made a trip to Atlantic

With a fight just three weeks away in his hometown,

After his knockout loss to Brian Ortega in the UFC

Despite low T.V. numbers and a recent lack of star

The Ultimate Fighting Championship has put together a string of

Former UFC lightweight champion Frankie Edgar is coming off of