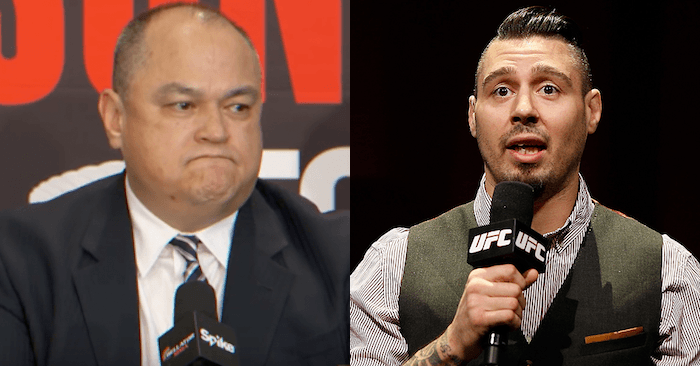 Last month’s Bellator 170 was a huge success for the promotion. The show averaged 1.5 million viewers, the co-main event featuring the exciting fight with Paul Daley knocking out Brennan Ward had two million viewers and the main event of Tito Ortiz submitting Chael Sonnen had 2.2 million viewers.

Backlash ensued in the aftermath of the Ortiz-Sonnen fight when UFC commentator Dan Hardy took to Twitter and made the allegation of the fight being fixed.

“The #Bellator170 main event was more choreographed than a Brittany Spears music video. Shame really… It might have been a fun fight,” Hardy said in the tweet and since has been deleted.

Some believed what Hardy said and ended up backtracking the claim in a recent interview on “The MMA Hour“.

We recently caught up with Bellator MMA president Scott Coker and discussed the claims made by Hardy. Coker, whose spent 30 years in combat sports promoting K-1 kickboxing, ran Strikeforce and now running the Viacom-owned company thought it was out of line for Hardy to make the comment.

“It’s absolutely ridiculous,” Coker told MMA Imports. “I think the genesis of it is from what I understand is commentators from the other fight leagues. So to me, look, those are serious allegations to make and it’s proposterous. It’s just ridiculous. It’s almost to the point to where we should turn it over to our legal department because you make allegations like that, you’re talking about affecting our promoter’s license, our credibility, our integrity. I’ve been in the fight business for over 31 years with a clean record. And I just feel like we’re being attacked. I don’t think it’s just happens to be like it’s happening because of some fans. I think it’s because this is a rogue effort and it’s something that’s directed towards us to effect our credibility.”

Making comments like that can result in serious consequences. Coker went as far to say they have looked into suing the former UFC fighter turned broadcaster. He feels you should be responsible for what you say, give credit to where it should be and stay focused on yourself.

“Yea,” Coker fired back. “We talked to Charlie (Viacom’s lawyer) about it. If you’re going to say something and you work in this business and you’re commentating for another league then you should be held liable. Because what you’re saying, people are going to listen. And at the end of the day, these allegations are ridiculous. It was all started by a commentary from a staff member of another company. To me, it’s like, “c’mon enough is enough already, just drop it. Give credit to where credit is due and just move on. Worry about yourselves”.”